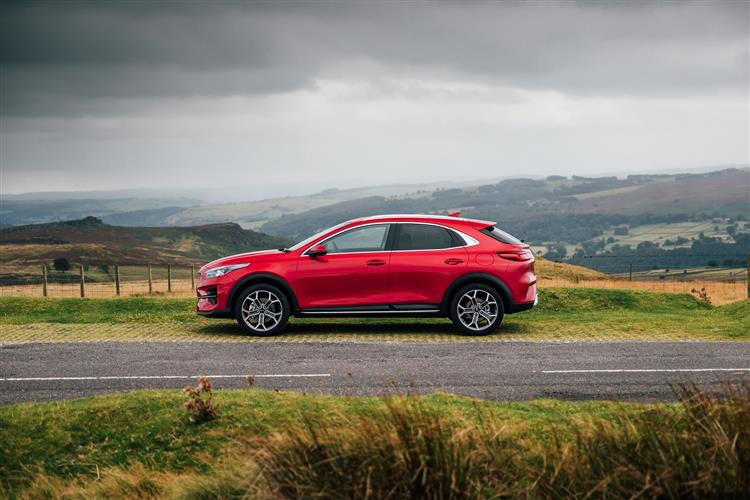 This deal is a stock offer. The specification for this vehicle has been pre-selected.

Kia adds another option to the Ceed range with this trendy XCeed SUV. Jonathan Crouch drives it.

It's easy to see why Kia is offering this XCeed compact SUV; sales of Crossover models like this are going through the roof just at present. It's less easy to see where it fits within the Korean maker's model line-up. After all, at much the same price point as more affordable XCeed variants, Kia has its Stonic small Crossover. And plusher XCeed derivatives overlap with the brand's Niro SUV hybrids and some versions of the company's mid-sized Sportage SUV. Then of course there are also versions of the Ceed hatch, the Ceed Sportswagon estate and the ProCeed sports estate. Complicated isn't it...

Don't expect shattering performance - but then buyers in the compact SUV segment aren't usually looking for that. The suspension has been revamped for SUV use compared with regular Ceed models so that it can combat this higher-sided model's body roll through the bends. The XCeed uses the same engines we're familiar with from elsewhere in the Ceed line-up. That means the range kicks off with a 118hp 1.0-litre T-GDi three cylinder petrol powerplant. Next up is a petrol 1.4 T-GDi with 138hp (also available with DCT auto transmission). The auto's not especially quick-responding, but it's a smooth-shifting 'box. Kia has also developed a 1.6-litre petrol plug-in hybrid variant you can ask your dealer about. The potent 201hp 1.6-litre petrol turbo unit from the Ceed GT is missing though. If you want to fuel from the black pump, there's also a manual-only 1.6-litre CRDi diesel, offered with either 114hp or 134hp. And the brand is promising that the black pump-fuelled models will shortly be embellished with mild hybrid tech. All XCeeds get lane keep assist and forward collision warning fitted as standard, while pedestrian detection comes as part of an optional safety pack. The First Edition version also features smart cruise control (on DSG auto variants), plus blind spot collision warning and a tyre pressure monitoring system.

The XCeed is quite different from the standard Ceed hatch - only the front doors are carried over. Potential buyers should like the sleek roofline and chunky wheel arch extensions mean which are meant to make this compact SUV look rugged and distinctive. There's more ground clearance than the hatch - and you get some black plastic bits and roof rails to give the SUV vibe. The XCeed rides on the same platform as the Ceed hatchback, but it's 85mm longer, with most of the extra length added to the rear overhang. It's 48mm taller too. Inside, it's much more like any ordinary Ceed. Cabin space is on a par with the usual hatch model rather than a full-size SUV, but one key difference on plusher variants lies with the new 10.25-inch infotainment system. The screen is similar to the ordinary monitor, but it's sharper, brighter and quicker to load. The base '2'-spec models still use that older eight-inch screen, which features a reversing camera and Apple CarPlay/Android Auto smartphone-mirroring. Rear seat space is similar to that of the Ceed hatch, but at 426 litres, the boot is 31-litres larger than it is in that more ordinary variant.

XCeed pricing kicks off from just under £22,000 and rises up to just under £30,000 in conventional form. The PHEV plug-in model prices from around £32,000. The range is based around '3' and '4'-spec variants. Plus the conventional models get a base 'Connect' grade too, which gets you 16-inch alloy wheels, silver roof rails, a rear spoiler, LED bi-functional headlights, front projection fog lamps, LED daytime running lights and LED rear lights and rear fog lamps. Inside, the eight-inch touchscreen features Android Auto and Apple CarPlay compatibility, together with a reversing camera system. Other equipment includes a leather trimmed steering wheel and gearshift, black premium cloth upholstery, automatic lighting control, electric front and rear windows with front auto up and down functionality, keyless entry, manual air conditioning and cruise control. Move up to level '3' and there's 18-inch alloy wheels, privacy glass, electric and heated folding door mirrors and a window defogger. Step inside and there's a 10.25-inch navigation system with telematics, black cloth and part faux leather seat upholstery, heated front seats and steering wheel, dual-zone climate control, an electric park brake and rear auto up and down functionality for the electric windows, as well as a smart key and button start. The centre console features a sliding storage box for extra versatility and pedestrian detection is added to the Forward Collision-Avoidance Assist (FCA) system on manual models and is an optional extra for DCT versions.

Let's get to the WLTP figures. The base 1.0-litre T-GDi petrol model manages 45.6mpg on the combined cycle and 140g/km of CO2. For the 1.4 T-Gdi petrol, the figures are 42.8mpg and 150g/km. Many XCeed buyers though, will want to fuel from the black pump. The CRDi powerplant on offer here is Kia's 'U3' diesel engine. Designed to go beyond the strict limits laid down by the latest Euro 6d TEMP emissions standard, this 1.6-litre Common-Rail Direct injection unit uses Selective Catalytic Reduction active emissions control technology to significantly reduce emissions. Hence a reduction in particulate matter and Nox compared to earlier Kia diesel engines. And improved CO2 readings of course. For the 1.6 CRDi diesel in 114hp form, it's 52.3mpg and 141g/km. Or 53.3mpg and 138g/km for the 1.6 CRDi in 134hp guise. Diesel buyers might be best off waiting for a little longer: both diesel units will soon be paired with a 48-volt mild hybrid setup, which should provide a modest boost to fuel economy. Kia also offers a 1.6-litre petrol-powered plug-in hybrid version of this car. This delivers 201.8mpg on the combined cycle and 32g/km of CO2. In its EV mode, the Kia XCeed Plug-in Hybrid is capable of travelling up to 36 miles and takes 2 hours and 15 minutes to recharge the battery pack to 100 per cent using a 3.3kW AC charger. As usual with Kia, there's a 7 year or 100,000 mile warranty which, since it can be passed from owner to owner, should help the impressively strong residual values. You might want to note that roadside assistance cover is limited to one year, but you do get a long 12 year bodywork warranty.

Kia thinks that this Crossover model will be its best selling Ceed derivative, which says much for the way the SUV craze is dominating customer thinking these days. Some might find this variant slightly pricey and space-wise, it doesn't actually offer you very much more practicality than you'd get in the ordinary hatch. Otherwise though, there's plenty to like here. The engines are willing and the base 1.0-litre petrol unit is probably all you need. Plus there aren't really any dynamic downsides here, for opting into the crossover craze. In addition of course, there's the peace of mind of Kia's class-leading 7-year warranty. In short, if you're shopping for this kind of car, there's plenty of reasons why you might want this one.